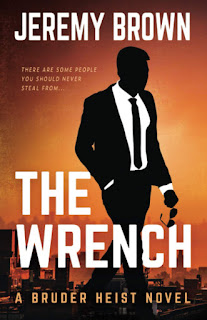 And hoping to be a little less infrequent. Or should I just say "hoping to be more frequent?" Hmm. We'll ponder that another time. Today, I have a book to review and I'm eager to talk about this one.

Every now and then, I get in the mood for a good hardboiled heist novel. It isn't my go-to genre, and I only read a handful every decade. But that might change upon discovering this new series from Wolfpack Publishing.

The Wrench by Jeremy Brown is the first entry in the Bruder series. It's an old school story and I mean that in the best way. Of course, every discussion of heist novels requires the obligatory reference to Parker, the immortal and amoral thief created by Donald Westlake. And there are certainly similarities between The Wrench's main character and Parker. But this tale is quite good taken on its own merits and isn't a simple clone, knock-off, or homage. And while Bruder isn't a good guy by any stretch of the imagination, I found he possessed a few subtle traits that make him a bit more human than Parker.

The story follows the traditional genre setup: the planning, the implementation, the titular wrench in the plan, and then the scramble to get back on track. (No spoilers here.)

Usually in heist novels, the planning is my least favorite part. Sometimes these portions can get boring, but thankfully Brown is a good enough writer where it remained interesting and I kept the pages turning. But it's the second half of the novel that really sizzles. Again, I'll keep this spoiler free but the tension continued to build until a very satisfying resolution.

And while this isn't my favorite genre, this book left me wanting more. The second Bruder book is already out and I intend to read it sometime this year. I also intend to check out more of Jeremy Brown's work. He writes lean and efficient prose that I really enjoy.

As for the publisher, Wolfpack continues to put out some of the best books in genre fiction today. I'm just getting started with their catalog, but they'll keep me busy for a long time to come. As a bonus, most of their books (including The Wrench) appear to be part of Kindle Unlimited. As a subscriber, I love that!

If you enjoy well-written, taut, lean crime thrillers, I recommend The Wrench. It's terrific!